Well…that took longer than expected.  What the husband and I thought would be a weekend project of tiling the surrounding walls in our upstairs hall bath ended up taking about 7 nights…and I’m talking LATE nights.  But was it worth it?  AB-SO-LUTELY.  It was a really gratifying experience learning (well, teaching ourselves really based on some YouTube videos) how to tile, problem solving as we went along and then finally stepping back to see the finished product, it was pretty awesome.

The best way to do something you’ve never done before is to start with a plan…and boy was I going to plan the heck out of this thing.

Since we haven’t ever tiled a wall before (apart from the 2×4′ plywood board I tested out our backsplash pattern on), we unrolled some of the extra underlayment paper we had laying around and drew the main wall (to exact measurement) on it – complete with window and all.  The husband and I both feel like bathrooms NEED to have a window, and when they don’t they feel like caves, so that left us with a window in the middle of the shower in the upstairs hall bath.  After doing a bit of research, I saw a lot of examples of people continuing their pattern to an opening or using bull-nose tiles to outline the opening.  We decided to go with the latter and off we went!

Starting from the middle we worked our way out and quickly ran into our first problem, the window was too wide and tall to simply cut a 45° angle into to create the corners of each window.  Our solution was to cut some squares down to the same size as the bull-nose tiles to put in the corners and, although it wouldn’t have been my first choice, I think it worked out pretty well.  I then started on the pattern centered to the window on the bottom.  The thought here was that we wanted to create a focal point for your eye to start where the pattern was full and had no cuts in it.  So rather than do some crazy math and try to figure out how to do the perfect number of tiles from the top of the tub to the ceiling, this was our solution.  Despite a late start that Saturday, I managed to get most of the wall complete leaving the edges open for where we knew we would need to cut to continue the pattern.  All in all, I felt really good after the first evening of tiling and figured we could be done the next day…yeah…I was definitely wrong.

We managed to finish the first wall the next day but we did not realize just how long it would take to make all of the pieces that needed to be cut.  Between cutting them with the scorer we had and filing them down to make them fit, it was an EXTREMELY time consuming process that we severely under-estimated.  The large portions of the walls went by really quickly but man oh man those cut suckers were awful.

Framing the shower niche and installing the back-splash-type tile and shelf were the next big challenge.  We used marble tiles that we found at Lowe’s (and were surprisingly cheap) for the shelf and bottom of the niche and decided to continue the pattern inside the walls of it (I guess we weren’t done punishing ourselves with all those cuts that needed to be made). 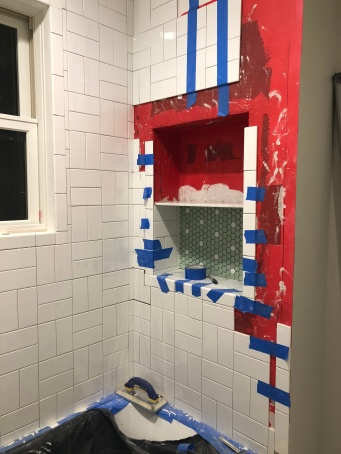 By the end of night 7 we were finally done 🙂  And after some back and forth on what kind of grout to use it’s all grouted and ready to go too!  Here it is!

We still have to find a piece of marble to install for the window sill but other than that it’s pretty much ready to be a fully functioning shower!  WOO HOO!!