Big things are happening at our (not so Little) House on the Hill and it’s made for a super crazy couple of weeks.  We’ve built and installed the IKEA kitchen cabinet boxes, shiplapped (that’s a word, right?) the fireplace, installed a few light fixtures, ordered and had doors and trim delivered, tiled the upstairs hall bathroom floor…needless to say that I’ve been looking for some downtime to sit down and share the progress the husband and I have made!  I’m super excited to share with you our first (nearly) completed room – the main floor powder room!

This is a huge leap forward for us for a number of reasons…the obvious one being that WE ALMOST HAVE A WHOLE ROOMDONE!  The less obvious one, however, but more essential reason is that we now have a functioning bathroom complete with toilet and sink!  I know, it’s the little things sometimes 🙂 but OH.MY.GOSH. you don’t realize just how awful port-o-potties are until you’re forced to use one when the temperatures have been hovering in the teens for weeks!  Let alone the fact that that thing has been an eyesore at the top of our driveway for almost 6 months now…and tonight, when we go to the house, IT WILL BE GONE!  I’m so excited to never see that stupid blue stink box at the top of our driveway ever again.

If you haven’t been following along – you can catch up on some of our projects for this room that I’ve shared to date including my first tutorial of our DIY vanity along with the inspiration for the flooring in the powder room.  Other than that, you guys are pretty much in the dark on what this room is going to end up looking like, which is kind of perfect since the first thing you’ll notice is that the walls are BLACK.

Yup, you read that correctly.  I was determined to make a bold statement with this room since it’s one that all of our guests will see (as well as one of the most used rooms in the house most likely) and what better way to do that than paint the walls a really bold color like black.  Pulling the trigger (or rather, rolling the roller) was still super nerve-wracking.  When everyone says “are you SURE about that” it can start to wear you down, but I was sticking to my guns (and the husband wouldn’t let me waste a gallon of paint I already purchased) and went for it…and I LOVED IT.  I used Sherwin Williams’ Tricorn Black, it is definitely black but not in a boring way, there’s somehow still a warmth to it that makes it feel almost like a jewel tone in the room itself.  I know, you probably think I’m crazy, but trust me, it looks amazing!

Next up was installing the shiplap.  For this room, we decided to go ahead and buy actual shiplap rather than ripping down plywood and doing more of a faux shiplap look.  It was definitely more expensive, but the final look was so worth it.  It was definitely a tricky task since this part of the house is the original part so the floors aren’t level, so keeping a level handy and using it on EVERY PIECE was super important.  The husband definitely got frustrated with it every once and a while since nothing was straight, but I think he did an awesome job at making sure the end product looked perfect.  We did a first coat of paint before installing the shiplap, then I lightly sanded it down with a block sander and gave it a second coat of paint.

By this point, you’re probably thinking to yourself “but what about those awesome floors  thought you were installing??”  Yeah…we definitely should have done that first…but alas, you live and learn.  I’m not really sure WHY we decided to do the install in this order, but we did, so there were problems we created for ourselves.  Maybe it just seemed like a simpler project to tackle so we decided to do that first?  Really, no clue.  FLOORS FIRST PEOPLE.

Ahhhhh, the floors.  My beloved floors.  I could not have been more excited about this project and what the final product was going to look like and more terrified about how it would get done at the same time.  Boy was this a FEAT.  Since we didn’t want to have tons of nail heads to fill, we decided to use liquid nails and just glue down the pieces to the plywood we had put on top of the subfloor to even it out a bit.  Let’s just say, I’m super impressed with liquid nails and how strong it is.  We started slow since we didn’t want to push things around too much, I drew a few lines on the floor to find where I wanted the pattern to start and then we glued down a couple of complete portions of the floor a day for a few days.  That is, until we got to the outside of the room.  Installing the majority of the floor was rather painless, time consuming – yes, but pretty painless.  But once we got to the outside border and needed to cut some pieces, it got rough.

Imagine being tired, frustrated with finding the right looking pieces and making sure you drew the angle right and then your husband just keeps saying “just look at the delta!” (and no, there is no more context than that…he just keeps saying it), that’s how I felt at the end of the night when we were so close yet it still felt so freakin’ far away to being done.  But alas, we did it…and here we are! (For the record, I was right when I said the piece wasn’t right, and the husband was not articulating why we should use it there he was simply yelling “DELTA!!” at me very exasperatedly).

Filling, sanding and staining were the last steps.  We decided to use Plastic Wood wood filler since it was the only thing we could find in “natural” color AND that said it could be stained.  Since the triangles we cut weren’t perfect, I spent a number of nights spackling that sh*t into the gaps in the floor…I was convinced it would look horrendous but I’m actually quite pleased with how it turned out.  Once the filler was dry, I sanded the floor with our rotary sander until it felt smooth to the touch from piece to piece.  I know it’s definitely not level (nor is it perfect) but I’m ok with that, it gives it some character…and let’s be real, who is going to sit on my powder room floor and run their hands across it to feel the minor height differences of different pieces?  Yeah, that’s what I thought.

Mixing the right stain was also no fun, and for those of you who follow me on Instagram know that this one was tough.  I ended up mixing pretty much every little can of stain that I had together because I wasn’t happy with how it was looking on my test pieces.  Once I thought I had finally achieved the color I was going for I proudly brought it upstairs and started in a corner (somewhere that would be hidden, just in case).  Sure enough, it was AWFUL.  I immediately ran for a rag, wiped it off, and sanded it down with the rotary sander.  What lesson did I learn here, you ask?  Make sure your test wood has gotten the same TLC as the actual final product…I was testing on a piece of scrap pine that hadn’t been sanded, watered, etc. and so therefore was not taking the stain.  GAHHHH.  More lessons learned on the fly I guess.  The next day I went and bought some fresh Minwax stain in natural and slowly added my concoction to it until I got a slightly warm light brown I was going for.  After 2 coats, I was finally happy with the finished product.  A couple coats of satin water-based poly on top and the floor was done! 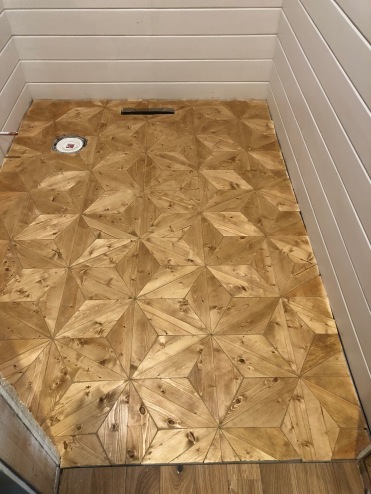 2 thoughts on “WE HAVE A BATHROOM!”